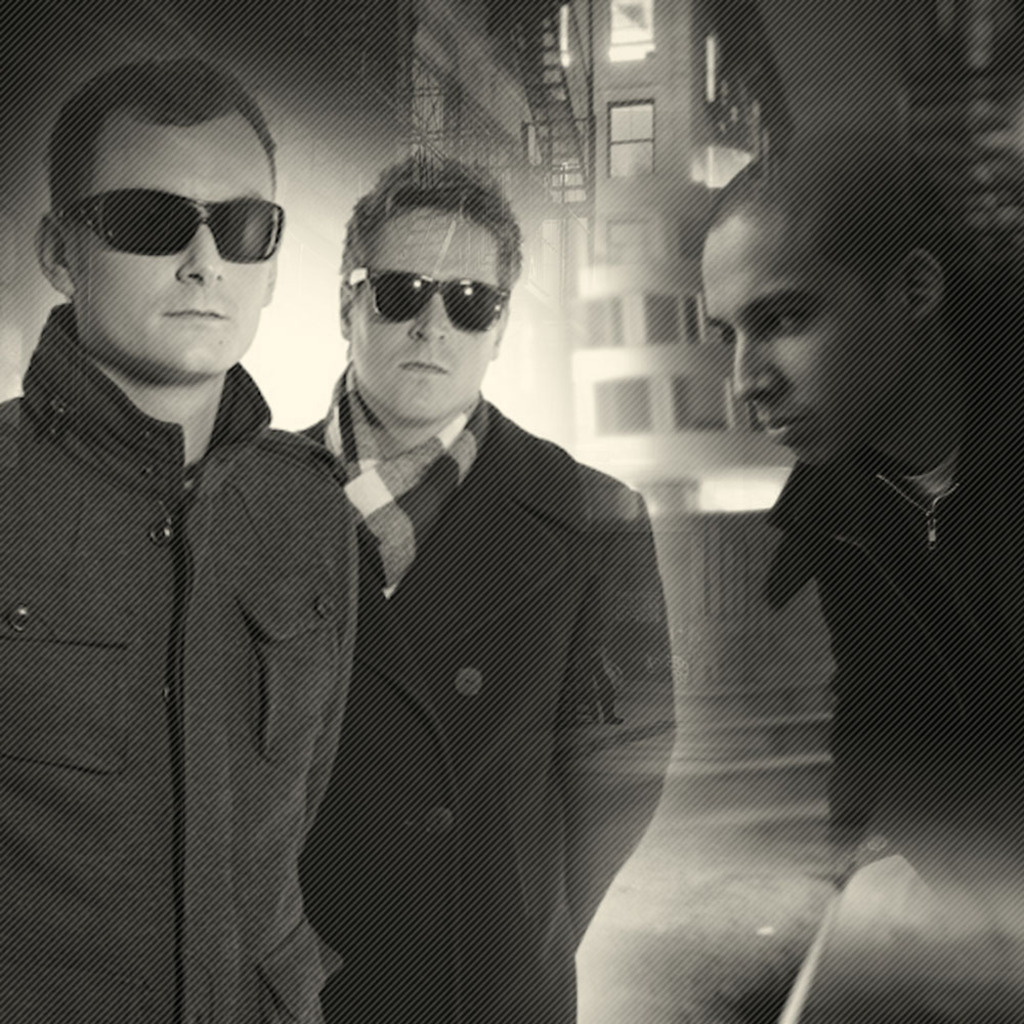 We recently spoke to Legion & Logam about their release 'House of Cards' and 'Solace' out now on Program.

You guys are from Atlanta in the US and Legion & Logam and are one the first American drum and bass collaborative projects to be signed to Program. Where did you meet and what made you decide to collaborate? Did you know each other outside of your production and live events? Was there anything in particular which made you decide to work together, for example stylistic similarities?

Legion (Hunter): Lee and I met in Nashville, TN at our weekly Club night 'Represent Drum and Bass' , around that time a previous member of Legion, 'Advance' had to take medical hiatus and there was an opening in the group. We hit it off immediately but it wasn't until Lee moved to Denver and I moved to Atlanta that we met with Thomas aka Logam.

Thomas was fairly new to production but his musicality and technical skills were mind blowing. He was beginning to release really amazing tunes on his own. After sending him an early demo to work on of what later became "House of Cards", our ears lit up and we knew this was a perfect marriage of clean production and minimal underground experimentation. I knew we were on to something special at that very moment, a new sound emerged that was very different from our previous works respectively.

Logam - I met Hunter Legion through Mayhem. I remember he played me one of Legion's tunes before introducing us and I immediately liked it. We hit it off on a personal level as well and decided to collaborate. House of Cards was our first track and I think we both realized when it was done that our styles work well together. One thing that I've always admired about Hunter is his endless knowledge on sound design so I think one reason I wanted to work with him was so I could pick his brain a bit more.

A lot of artists feel like the scene they grew up around had a massive impact on their musical style. What's the drum and bass scene like in the South East?

Legion (Hunter): Drum and bass has always been around here but It has been a long time since a thriving scene has existed here. We all grew up with musical background in the 90's in Rock /metal / punk but then found the techno /Neuro funk pioneers that preceded us. Internationally acclaimed artists like Sinthetix, Skynet , Gridlok and Jae Kennedy + Co. all had an impact on what we were trying to do in drum and bass at the time.

Despite early attempts to mimic these artists, It seemed like our style and originality really emerged when we began to take influences from less obvious sources of the U.S. musical history. There were some very talented vocalists that we knew in Nashville, TN and Atlanta, GA all with Southern Pop, Rnb, Folk and Gospel backgrounds. Artists like Adam Wright, Darron Word, and Scott Schwartz bringing their heritage to us in the studio and then having us juxtapose it with underground UK rhythms at 174. That was the idea we began to build upon.

Logam -Drum & Bass has never been widely accepted in the states, let alone the South East, but we definitely have some promoters who are making a point to push the DNB sound as many of them are fans of it and grew up with it. We do have a DNB monthly called Torch, which is free, and many surrounding states also offer something similar.

Do you find any massive cross-continental differences? Or have you been influenced by different musical styles coined in places like the UK?

Legion (Hunter): We were both always very big fans of Ram Records since the late 90's. Lee was born in Milton keynes, UK but was raised in America so he has definitely always been influenced by the UK. I have been Djing Drum and bass and House music Since '99, and outside of the 'Chicago House' music era always felt like I clicked with UK music scene a bit more than here.

Logam - I only recently learned about the history of Drum & Bass. I've always considered myself to be sort of a �noob� in this scene since I was completely oblivious until about 2006. I would say that several of the artists that have influenced me thus far have been from the UK though.

We've seen that you also produce dubstep, amongst other genres. But what introduced you to drum and bass? Were you predominantly involved with any other scene before you started creating drum and bass? What kind of artists would you cite as influencing your sound the most?

Legion (Lee) : Having both grown up listening to Andy C and Dj Hype mixing records, that has always been a major part of our style. You can also hear subtleties in these records of Progressive Trance , Techno and House influences which slightly predate our love for Drum and bass. Once we found drum and bass music around 2000, it was completely consuming and there was not much room for anything else. EDM , Hip Hop and Pop majorly still influences us in what to do, or what not to do... We have watched the new sound of UK Drum and Bass emerge over the past 5 years with artists like Commix, Sub focus , Rockwell , Break and even later with Kove and Wilkinson. This really helped set the bar of our production and influenced us massively.

Logam - The first Drum & Bass track I ever heard was Pendulum's remix of Pack of Wolves. My buddy Aireon played it for me at a mutual friends house. Up until that moment I was pretty much just a metal head. I grew up listening to bands like Sepultura, Entombed, Soilwork, Meshuggah, Pantera, Emperor, etc so I think it's really no surprise that hard hitting Neurofunk caught my attention. I had a band for a number of years and currently play lead guitar in a different band so I think its safe to say that I was predominantly involved in the metal scene. As far as influences go, I started off with Pendulum, Noisia, Black Sun Empire, Audio, Gein, Unknown Error, Mayhem, State of Mind, Spor, etc and eventually the sounds of Icicle, Spectrasoul, Logistics, Netsky, Seba, Consequence, etc started seeping in. I like a wide variety of styles but often find myself leaning towards the minimal vibes these days.

What was the creative thought process around 'House of Cards' and 'Solace'? How did it originally come together? And how do you guys work together as a collective? Are there any software/hardware differences that help/hinder your collaborative effort?

Legion (Hunter): there was no real direction stylistically other than quality production with a musical structure , something more or less "timeless". We wanted to combine Mainstream US pop sounds with underground UK rhythms. Something slightly different on offer than the currently over-saturated market of tech bangers that are easily disposed of in a weeks time.

House of Cards is a massively personal track to myself, (Hunter) I wrote the lyrics with Adam based on real life events. I truly feel that if a song has "truth" to its lyrics or purpose, it resonates with the listener and they can learn something about the artist without ever knowing them. This song is a great example of that truth. It's basically about heartbreak, something anyone can relate to, and then becoming a better person through that experience. The subtle darkness in House of Cards leads into to the brighter, still bittersweet feel of "Solace". I'm not sure if this is obvious to everyone but this record is about being challenged by adversity and then finding peace with yourself and moving forward. Its been a very cathartic process writing this record to say the least.

Logam - Legion uses Logic and I use Cubase so we generally exchange audio stems online and also work together in the studio when we can. We use a combination of software, hardware, live instruments, foley sounds, and we often work with live vocalists.

What I love about House of Cards is that not only is it our first track together, but its really just the result of two artists seriously vibing together. As hunter said �there was no real direction�, we didn't say �hey let's make THIS type of tune�. We just played off of each others ideas / sounds and for the most part have stuck with that formula. Both House of Cards & Solace started off as loops that Legion put together. I ended up changing the original bass line on House of Cards and added some live elements like guitar, foley sounds and percussion. Even the woodblock sound in HOC is a live performance recording. It's actually a wooden frog that my lady brought me back from her trip to Spain. From there I sent it back to Hunter where he finished off the arrangement, making it a bit more to the point. It was his idea to add Adam Wright to the mix and I could not have been happier with the results. Hunter is really good at writing and mixing down vocals.

The flow for Solace was a little bit different. He came over to my studio with that one instead of emailing me the parts and I just started messing around adding synth melodies to the already deep vibe he created. Then the usual guitar and percussion elements were added and that one was more or less finished that same day.

This release is a massive look for you. How do you think your music is going to evolve from this point?

Legion (Lee) : We hope to continue writing music that evolves with the times. It's a very interesting time for the genre, We would like to keep pushing mainstream influences and get drum and bass culture widely accepted in America, while still keeping the classic Drum and bass format that has flourished in the UK. Working with a broad range of styles that could slot into any Dj's sets. Pushing the Vocal anthems for radio and festivals as well as niche tracks for underground Dj's . We hope to write an Artist album one day that really represents our musical diversity, and would be thrilled if it found a home on Ram or Program.

Logam - I'm not really sure how it's going to evolve. We both like a variety of styles so it's hard to say. I definitely want to keep making more tunes like House of cards but that doesn't mean we won't make heavier ones too. I think we're both relatively diverse producers so I am eager to see where we go with it. Regardless of the sound, I would be more than happy if our work continued to be released on Program or RAM. It's truly an honor to be a part of the roster.

LEGION & LOGAM - HOUSE OF CARDS / SOLACE is out now on Program