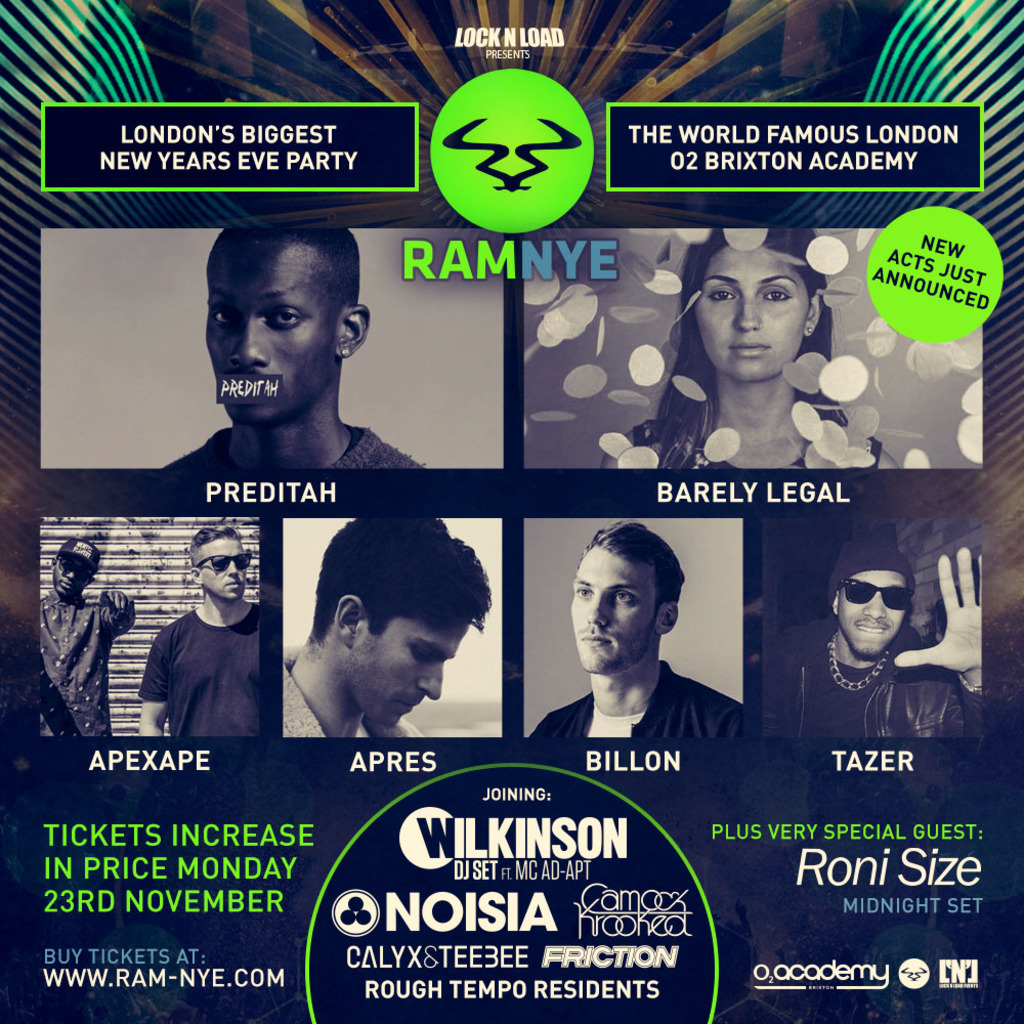 The second phase of our seminal New Year’s Eve party has now been announced, including some of the UK’s most resounding acts across its major genres. Alongside the drum & bass heavyweights Wilkinson, Noisia, Camo & Krooked, Friction and Ram stalwarts Culture Shock, Loadstar and Frankee, this will be a date not to miss. The only way to take you into 2016.

Tickets increase in price on Monday 23rd Nov at 12pm. Get yours now!

Preditah’s ascension to the top of the Grime scene during 2011 was nothing less than extraordinary. JME’s enigmatic ‘PRE DI TAH’ tweets throughout that February sparked wider intrigue around the Birmingham producer and ensured his debut release, the ‘Solitaire E.P’, shot to number four in the iTunes electronica charts, receiving plays across 1Xtra, KISS FM and Rinse FM in the process.

True to her stage name DJ Barely Legal caught an early start in music- buying a first set of decks at the age of 19 and proceeding to throw away the rulebook, mixing up styles, genres and artists to create eclectic but expertly weaving mixes. Those mixes featured on the likes of Rinse and reguarly on 1xtra to great acclaim,

Kicking off 2015 they’ve continued radio support from the likes of Radio 1′s Annie Mac, Skream, B.Traits, Mistajam, Monki, Toddla T, DJ Target, & DJ EZ as well as hosting their own weekly show on Kiss FM every Thursday night. With EP releases reaching the No1 position on both Beatport & Juno Charts with the ‘Got To Give EP’ and the ‘Sewer Skank EP’, they continue to create the most dazzling and contemporary shows around making them one of the most exciting and unforgettable acts to see.

Hailing from the quiet county of Kent, 22 year old DJ-Producer Après marks his debut release on the vivacious Love & Other imprint, with his latest offering ‘This Ain’t Love’ featuring Andrea Martin.

Following his outstandingly well-received single ‘Chicago’ and having received continued support from the titans of Radio 1’s dance entourage; ‘This Ain’t Love’ sees the young beatsmith continue to glide from strength to strength.

Après dishes up another sensational cut of evolving synth work layered over lush melodies, low slung basslines and captivating rhythms chorused by the lush vocals of Andrea Martin. On remix duties Sick Elektrik, Pete Graham, Worthy and Sinprint each craft their own re-interpretation for added zing – together with Après own 4AM cut taking the track deeper and darker.

The last 12 months have seen Après remix Lovebirds, Sam Sure & namely David Zowie’s chart topping single ‘House Every Weekend’. This time around he dips back into original craftsmanship to create a timeless labour of love, set to catapult his way into 2016 with prosperous horizons.

Billon offer up a distinctly London-flavoured take on house, drawing equally from UK garage’s bump ‘n’ flex, the rolling grooves and sumptuous sound design of tech house, and deep house’s subtle links with soul and disco. Alongside contemporaries like Huxley and Dusky, they’re among a growing wave of UK-based artists exploring a new angle upon the genre, one whose bass-led momentum is swiftly rising to prominence on dancefloors in both London and further afield.

Undoubtedly 2014 has been an amazing year for UK based producer Tazer.

Labelled as one to watch in 2015 as he recently made Zane Lowe’s coveted Future Radio 1 playlist.

Tazer has received amazing support from BBC Radio 1 presenters and DJ’s such as Pete Tong, Annie Mac, Nick Grimshaw and Zane Lowe and for his forthcoming single “Wet Dollars” which has been relentless in making its way through the House Music scene. As well BBC 1Xtra Mistajam, Target and Cameo championing “Wet Dollars” as one the biggest club records of 2014.

Moreover, Tazer has recently featured on multiple remix’s for likes of DJ Fresh & Ellie Goulding’s “Flashlight” and many more.

The Oxford located producer has also made his name as a DJ, performing not only around the United Kingdom but also in Ibiza during a weeklong tour of the Island.

Renowned for his innovative style of mixing and use of effects, Tazer manages to turn every set into a creative compilation that projects his style directly to the crowd.

With support from some of the world’s most powerful names in House music, Tazer is certainly on his way to becoming a figure-head for the UK house scene.